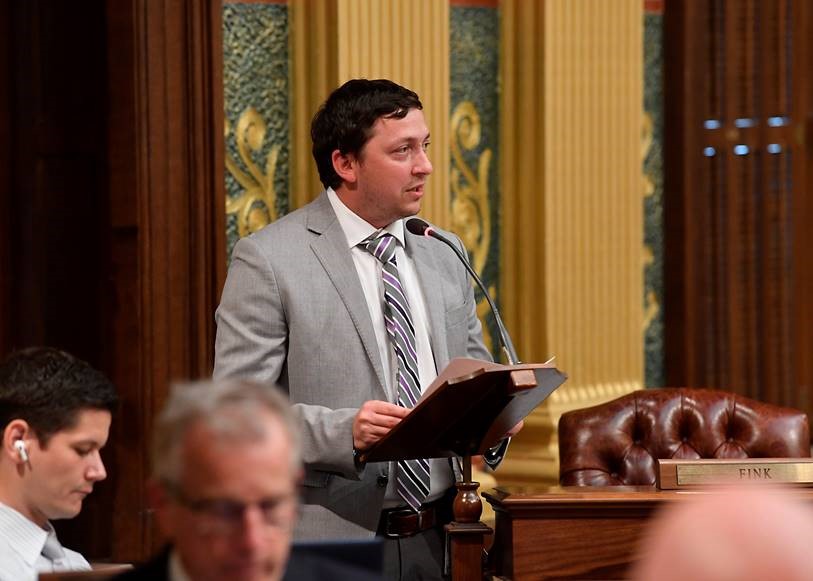 State Rep. Steve Carra, R-Three Rivers, speaks on HR 205 before the Michigan House on Wednesday, May 25. The resolution, which was approved by the House, urges the U.S. Congress, federal agencies, and state departments to address the ongoing fertilizer price increases and shortages that are impacting Michigan farmers.

Representative Steve Carra’s House Resolution 205, urging the U.S. Congress, federal agencies, and state departments to immediately address the ongoing fertilizer price increases and shortages that are severely impacting Michigan farmers, has been approved by the Michigan House of Representatives and will be sent to the United States Congress.

“Farmers play a vital role in Michigan’s history, along with today’s culture and economy,” said Carra, of Three Rivers, a member of the House Committee on Agriculture. “There are about 10 million acres of farmland in Michigan, and we are home to over 47,000 farms. That’s millions of acres of farmland needing to be fertilized.”

Over 800,000 people work in Michigan’s agricultural industry, which contributes more than $100 billion annually to the state’s economy.

“Our farmers have helped make this state a national powerhouse for decades,” Carra said. “However, prices for fertilizer, a necessary component utilized by farmers, have doubled in some areas of our state over the past year due to increasing demand, federal tariffs, skyrocketing inflation, and the rising price of natural gas. Meanwhile, fertilizers are becoming increasingly scarce, as demand increases, and supply dwindles.”

Farmers are being forced to ration their fertilizer, or come up with other less-desired, ineffective solutions that lead to less crop production, hurting Michigan families along with our state’s supply chain, all the while burdening a major slice of Michigan’s economy.

“This simply cannot go on,” Carra said. “It is essential Michigan’s farmers have easy access to affordable fertilizers. That is why I am calling on the U.S. Congress, federal agencies, and state departments to step up and prove prompt assistance for one of Michigan’s most vital group of workers and industries.”

HR 205 was immediately adopted by the House, after passing the House Committee on Agriculture unanimously.

The act of abortion has been legislated in the past, most notably in Michigan with the 1931 law that stated the administration of drugs meant to induce an abortion is a felony. However, this law has been compromised since the 1973 Roe v. Wade decision.

Tuesday, June 14th I voted NO on HB 5042 (Rep. VanWoerkom) would amend the Child Care Organizations Act by requiring an applicant for a child care center license to disclose the ownership interest in the child care center. EXPLANATION: Further requirements place a barrier on child care services. PASSED: 96-8 I voted YES on HB […]